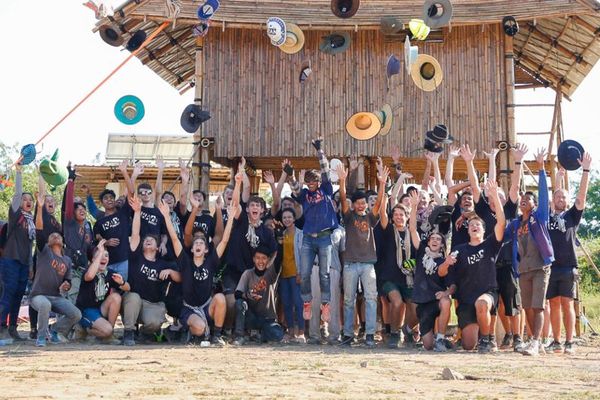 Not many charities begin with a blind date. But that’s the story of RAW, a nonprofit working to empower vulnerable Cambodian families.

Nicole and Troy Roberts were working for different nonprofits in Cambodia when they were set up by a friend. Among other things, they discovered a shared passion for supporting the people of Cambodia and making a lasting impact. A year later, days after their wedding, they dreamt up the idea for RAW. “They wanted to give back tangibly - not through handouts but by working alongside Cambodians,” says Penny Gladwin, Organisational Services Director at RAW.

Seven years on, the charity employs almost 50 people; 73% of the team are Cambodian and the remainder are Australian or American. “RAW has a dual mission: to bring innovative solutions to some of the world’s most vulnerable in Cambodia, and to drive home to young Australians about how they can make positive change by taking part in real project service trips in Cambodia, creating a powerful intersection for both missions.” Nicole and Troy, both Australian, have grown RAW into a self-sustaining organisation. Projects completed by the team includes building bamboo houses, managing a bamboo plantation, teacher training, education on finance and freedom from debt slavery, and more recently health and sanitation education, toilet construction and planting community vegetable gardens.

Cambodia is a country in recovery from the genocide of the 1970s. Under the communist Pol Pot, up to a third of the population was killed. “It’s a country of young people,” says Penny. “And everyone is desperate to learn. Part of that comes from their history - education and intelligence used to be frowned upon.”

RAWs response to this hunger for education is not to bring in teachers from outside, but to train Cambodians from the inside. “We teach them how to use local resources make their lessons creative and learning fun," she says. So far, more than 100 teachers have been trained through RAW. They also employ two Cambodian social workers. “They’re tackling the debt slavery by training and talking to families about how to get out of debt - we make it a policy not to pay out anyone’s debt. They set up money boxes so that people can put money in each week and watch that grow and the debt reside.”

Education is one of three pillars that make up RAW. Their other aims are to sustain and to protect. "Sustain is about providing sustainable livelihoods by employing villagers to build the houses and manage the bamboo plantation. The hope is that in a few years the bamboo from the plantation will be used for constructing the houses in the village outside the city of Phnom Penh,” says Penny. “Protect is about innovative design and build projects that provide safe housing, community infrastructure and freedom from debt slavery."

When people sign up to join a RAW Impact Team Trip, the majority of their time is spent building houses alongside local builders and the family it's for. “What’s great about RAW is that we totally admit that we make mistakes. When we started building, we used a fancy Western style. But the families told us that they don't want bells or whistles, they want basic - that’s what worked for them,” she says.

Unlike many other charities based in South East Asia, RAW also have a policy for volunteers who want to take photographs on site and post them on social media. “We ask people not to take photos - we don’t want anyone to take advantage of the families,” she says. Instead, the RAW staff take photographs that meet the strict guidelines that protect families and individuals and send them to those involved for their social media.

Short-term volunteers come mainly from Australia, but also from America and Europe. The minimum timeframe is two weeks but many stay for months. “There’s an Australian family who committed to staying for two years and sent their children to the local school,” she says. The spread of the coronavirus cut their time short but they hope to go back, when they can.

The travel restrictions due to the coronavirus have had a huge impact on donations. “The model that RAW uses to raise funds is the commitment from every team participant to raise $1000 AUD, invested directly to the projects. Because no one can travel anymore, that instantly becomes zero.” In response to this, RAW has cut back on all business expenses and launched a new campaign called The Sidekick Project. “It's a 'virtual trip' - people can sign up to support any of our Cambodian crew who will build a house for one of the families in our programme waiting for a home. Those who sign up commit to fundraising for our projects and people. Participants can encourage and engage with our RAW crew, who we are calling our ‘Hi-Vis Heroes’, in the lead up to the build week which will be streamed live to all participants later this year. This is to ensure that donors feel connected in the same they would if they were on the ground themselves.”

Further funds come from regular giving from schools, churches and those who have volunteered in the past and continue to support the charity financially.

Managing time off with Timetastic

When RAW sent a message to Timetastic explaining the impact of the coronavirus, we gave them six months free. Under our new ethics policy for charities, RAW will also receive 50% off its future subscription.

“It was music to our ears,” says Penny. “We love Timetastic - it’s so easy to use. We connect it through Slack so that we can see who’s not coming in. I also love the notifications when someone is waiting for a review.”

She manages PTO and vacations across the whole organisation. With everyone spread out across Australia and Cambodia, everyone has different public holidays so each person has an individual policy and allowance. “It’s difficult to manage but having a visual planner makes it so much easier.”

Adapting to the coronavirus

Rather than lose any team members, everyone has taken a pay cut and agreed to work a four day week. It’s something that they may continue long term. Their Monday morning team meetings on Zoom are more important than ever. “It’s imperative to our culture,” she says. “It’s a time and space to get together and share a good news story.”

During lockdown, Penny has worked specifically on polishing procedures, updating the staff handbook and familiarising herself with accounting practises. The Operations department in Cambodia have been negotiating contracts to make the team trip and volunteer experiences even more cost-efficient when they start up again. “I've realised that we need to diversify where our donations come from - the exchange rate between AUD and USD means that we lose almost half. Donations from the States or the UK would be a lot more fruitful.”

RAW, which stands for raising awareness worldwide, is a way to bring support from all over the globe and focus it into families, livelihoods and education in Cambodia. To find out more or to make a donation, have a look at the RAW website.

I'm CEO at Timetastic. That means I accept responsibility for everything, the buck stops with me! Reach out through the support centre if you want to say hello.